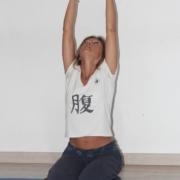 To deepen our knowledge of the health exercises created by Shizuto Masunaga and known in Japan as “Keiraku Taiso” (meridian exercises), we received from Haruhiko Masunaga an article that definitively clarifies the essential difference between “Keiraku Taiso” and “Makkoho” , the latter created by Wataru Nagai in 1933. We thank the author of the text Mami Kawa, who authorized us for publication. Mami Kawa sensei has been working for years in Germany and Austria as a teacher of holistic movement, yoga, Keiraku shiatsu, Meridian exercises and Makkoho; you will be able to know the differences between the two types of exercises. Enjoy the reading!

The 5 days intensive course which takes place at Iokai Center in Ueno, Tokyo, starts every morning with the Meridian exercises. It is also a daily routine for the teacher, Mr. Haruhiko Masunaga to do the exercises before starting the shiatsu treatments. However, we cannot learn the exercises called “Makkoho” in the course taught at Iokai which was founded by Mr. Shizuto Masunaga. Then what is the Makkoho which is taught almost without exception at the shiatsu schools outside of Japan?
Harboring this doubt in my mind, I took private lessons at the headquarters of the Makkoho Association, a nonprofit foundation in Shibuya, Ttokyo, in December 2017. On that occasion, I was instructed directly by the chief coach, Mr. Masahiro Ono, which enabled me to ask questions in detail. Mr. Wataru Nagai created Makkoho in 1933 as a way of maintaining health.
He suffered a cerebral hemorrhage when he was 42 years old and was paralyzed on the left side. However, he gradually regained his health as he practiced everyday the exercises taking in the worshiping gesture as a hint. In addition, he developed with 4 types of basic physical exercises.
Even now, many members are actively working all over Japan and the United States under the management of membership fee, and they have establish five levels for those wishing to become their instructor. The coaching is authorized only to those who have obtained qualification has an instructor from the Associations and so normally, those without a license are not allowed to teach the Makkoho exercises.
In spite of thorough regulations, why did the Meridian exercises which are taught abroad, especially in Europe, are now called Makkoho and even the way of doing the exercises has become mixed up with that of the Meridian exercises? There seems to be various speculations concerning this matter.
For example, Mr. Tokujiro Namikoshi, the former Chairman of the Japanese Shiatsu Association, was an enthusiast for the Makkoho exercises; the practice method done in pairs called guidance exercises resembles closely with the Meridian shiatsu; the English person who learned the Meridian exercises in Japan spread it in European countries as Makkoho; or there is even a rumor without any credibility that it was created by someone called Mr. Makko.
It is said that Mr. Shizuto Masunaga conceived the Meridian exercises as his last mission and with it, the Masunaga Meridian System become complete.
Correct understanding of the Meridian exercises is indispensable for those who practice shiatsu treatment based on the meridian thought. Furthermore, if we are to continue paying respect and gratitude to these two originators of the great exercises and their successors, it is only fair to clearly distinguish these two exercises.
For this reason, I have Ssummarized and compared the common points and differences of the Meridian exercises and the Makkoho in the following chart.

from the newsletter of the German Shiatsu Association “GSD Shiatsu Journal”, October 2018, revised in February 2019 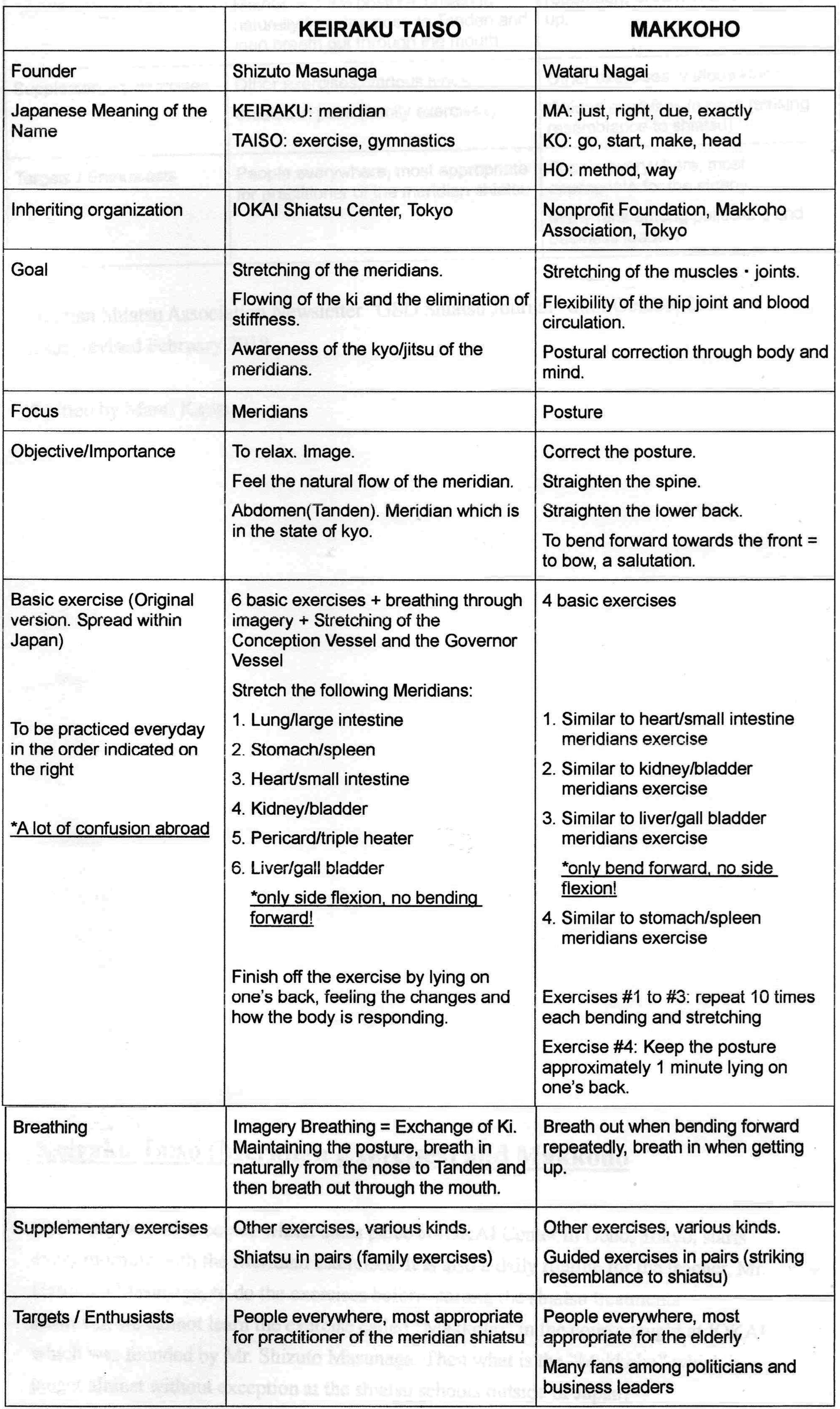